Showing posts from August, 2009
Show all

By FintanDunne - August 30, 2009
In a recent article on Tehran Bureau, Muhammad Sahimi was too dismissive (by dint of his choice of adjectives), in describing of Ahmadinejad as: "isolated and delusional", and he erred in reducing the regime to the person of the president.

But he was correct to describe Ahmadinejad as "weak". Professor Sahimi accurately catalogs the ongoing obstruction of the hardliners and the very public political fractures. Furthermore he shows the regime is now tellingly reliant on a narrow base of IRGC appointees to fill government posts.

Ahmadinejad/IRGC's core 'hard' support is as low as 12%, with a 'softer' support extending to up to 20% of the population. Because of this, the disputed president's public pronouncements are reductionist and defensive --aimed at his own supporters and the ill-informed. By contrast, most other voices in Iranian politics are addressing the remaining 80%+ of the population.


In the aftermath of voting in the Afghan Presidential election, we chart the prospects for progress. We gauge the status and strength of political opposition to the Iranian regime. And we touch on the dire implications of the sophisticated multiple bombings and attacks in Baghdad, Iraq.LISTEN:Mp3
Audio 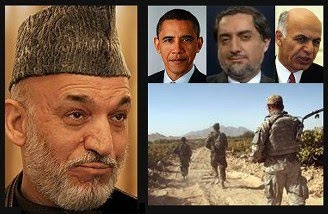 In advance of the imminent Afghan Presidential election, we preview the leading candidates; details the deals; and chart the furure of the NATO campaign and the battle for civil society in Afghanistan. LISTEN:Mp3
Audio Professor Scott Lucas
Scott Lucas is Professor of American Studies at the University of Birmingham, UK. He is also an Adjunct Professor at the University of Tehran, and on the Advisory Board of the Centre for American Studies and Research at American University Beirut. He writes for, and is a founder of, the weblog EnduringAmerica.com --where he currently blogs unmissable news analysis and reporting.
Post a Comment
Read more
More posts