Showing posts from January, 2011
Show all

Street activists in Cairo have upped the ante on the Mubarak regime with a plan to march on the presidential home Tuesday to take possession of it for the people.

Speaking live on AlJazeera in Cairo late Monday Hossam el-Hamalawy, an Egyptian socialist activist and blogger said that protest groups who have occupied Tahrir Square in Cairo decided to march on Mubarak's
presidential palace tomorrow and occupy it.

The move raises the stakes on the army's guarantee today that it will not use force on protesters pursuing their rights lawfully.

It also sets the scene for a potential bloody clash between the protesters and the regime's regular and irregular security forces.

As per our call at that time, the moment the Egyptian Army was deployed on the street, marked the fall of the current Regime. The success of the Revolution is now a question of degree only.

The most telling demonstration of the current situation on Saturday evening in Egypt, is that a pitched battle with gunfire has been waged all day between protesters trying to destroy the Interior Ministry and the Regime thugs defending --yet the Army has not intervened to stop the clashes or defend the Ministry.

That is ominous for the Presidency, and an indication of the degree to which the military command is constrained in action.

Arizona Shooter: Mad with a Bird on My Shoulder 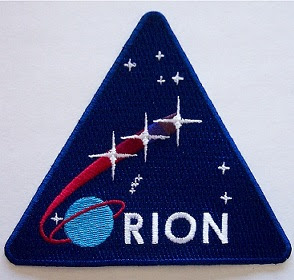 And recall that  NASA astronauts/team wear the mission patch on the shoulder; and that Giffords' husband, Mark Kelly, will be the commander of the next generation Orion spacecraft; and that the slang for a new aircraft is a "new bird"; and observe the NASA Orion mission patch.

That patch ties in all Loughner's references: it's a new bird patch for the shoulder, with stars, one red eye and a light blue iris. And Loughner, with this strange bird on his shoulder is playing a demented Long John Silver to NASA's straight-man.