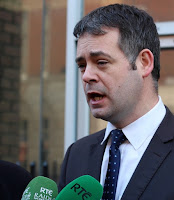 "In recent days, a series of documents have come into my possession which help to give a more complete assessment of issues relating to IBRC, to Siteserv and related matters.
Back in 2012, Denis O'Brien, the eventual owner of Siteserv had an agreement with IBRC whereby the bank “would receive 92.02% of all Digicel dividends in excess of 50million dollars” as part of a loan repayment agreement.
In that same year, there was a once-off dividend distribution of 300million dollars. The bank received a scheduled payment of 150million euro, which equated to 65% of the dividend distribution. The balance was then used by the owner of Siteserv to pay down a Bank of Ireland facility which had been used to fund the Siteserv deal. This was all approved by the IBRC’s Group Credit Committee.
In other words, we seem to have the terms of a loan agreement with IBRC being used to pay down a loan related to Siteserv but with another bank.
And there are other documents I have seen which lead me to ask legitimate questions of the way that IBRC was being run in the public interest.
[...] 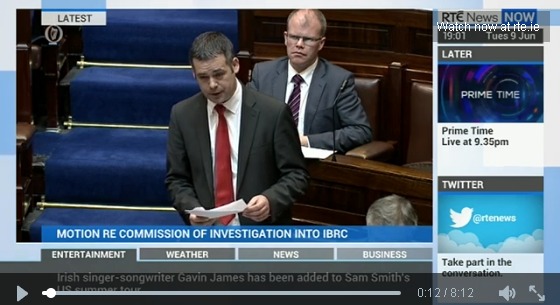 On 21 June, the individual in question responded with a proposal for a one-year extension on his loans with a capital repayment of €100million in November 2013. This was rejected outright by the Group Credit Committee on 4 July 2013.
[...]
Denis O'Brien made a fourth proposal to IBRC (on 10 October 2013) for a 12-month extension with no capital repayments which was, according to the document I have, it was approved on 14 November 2013. This was for a loan of in excess of €315million with a margin interest rate of 3%, amounting to €10million per annum.
[...]
How does a bank in liquidation create what is essentially a new €315million loan which its Group Credit Committee had rejected just a number of months earlier? Why didn’t IBRC place a call on the now expired loan? How did the verbal agreements between certain managers prior to liquidation outweigh the decision of the Group Credit Committee?
From documents I have seen, it appears that IBRC’s former Chief Executive, Mike Aynsley, along with Richard Woodhouse, made a verbal agreement with Denis O’Brien to give him an additional three years to pay off his loans with the bank. This is the same Richard Woodhouse who was present during the discussion of Siteserv. It is clear from the documents I have seen that Mr O’Brien did not wish to have his loans sold on to a third party but instead wanted a 12-month extension in order to work out the loan himself.
Full text At An Phoblacht