In 2013, while under questioning from London Assembly members at City Hall, the then-London Mayor Boris Johnson was asked about cuts to fire services which had lost London 600 firefighter jobs and 10 fire stations.

"How?" came a call from the public gallery.

Dinsmore interrupted: “You’ve lied to the people of London in your election.”

Johnson, who is now the UK's Foreign Secretary, yesterday tweeted: “My thoughts and prayers are with everyone caught up in the horrific tower block fire in London.” 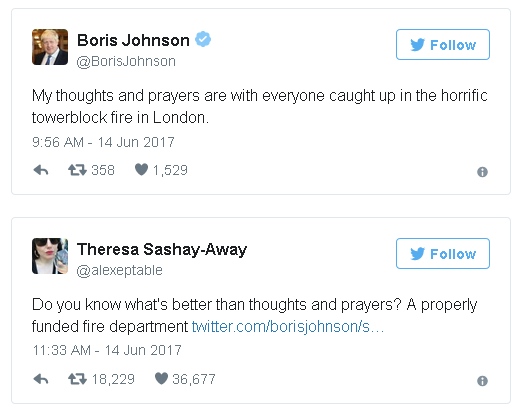 Labour MP Grahame Morris tweeted that 10 stations had closed when Johnson was mayor.
Outspoken LBC host James O’Brien said of the clip: “I’ve spent my whole life being a trusting, naive little boy, thinking the people in charge would somehow deep down have our best interests at heart.
“Surely no one would actually turn a flat full of poor people into a potential bonfire, just to save a few quid or make the view better for the rich neighbours over the road.
“I didn’t think that level of cynicism exists.
“Then I saw this man sitting in this studio and thought ‘God, it really is a game for some people’.”


People felt Johnson’s thoughts and prayer might not be enough.