FAIL TO PROTECT HER SON FROM IRISH PEDOPHILE
by Fintan Dunne

Irish police, family courts and the social services body Tusla all failed to protect the nine-year-old son of a Polish woman who was sexually abused by his Irish father, according to a documentary broadcast on the national Polish television station TVP1. The boy's mother was denied custody and contact despite a doctor's medical evidence confirming that the child's behaviour was consistent with having been sexually abused. Eyewitnesses testimony also confirmed his bizarre behaviours with sexual abuse overtones.
The mother Danuta(*pseudonym) began to be physically and verbally abused after she became pregnant and with alcohol as a prime factor. The case officially began when Danuta fled the family home with her son for the sanctuary of a domestic violence facility.
She was distraught when the child revealed to a family friend and then to her that he was a victim of digital anal penetration. She and her friend attempted to pursue the allegations with the Irish police, but she maintains that the esteemed position and social power of the abuser prevented proper investigation.
The documentary includes a voice interview with Danuta's friend -who confirmed that her own statement of complaint to police on the matter somehow disappeared. She was too fearful to appear on camera. The documentary crew were also unable to secure an interview with a therapist who dealt with the boy's case. The therapist now works for Tusla.
However they were able to publish the therapist's evaluation report which states that the boy had given many signs of being sexually molested -including initiating sexual behaviour with other children. Tusla were given a copy of that formal evaluation -which recommended psychiatric intervention. His mother says he was asking other children to kiss his penis and touching them genitally.
Professor Michael Fitzgerald, an Irish professor of child and adolescent psychiatry was consulted and issued a formal report which said the child needed immediate medical care for trauma and the visible effects of abuse. He described the child's allegations as "absolutely true". However the family court subsequently refused to allow Prof. Fitzgerald's professional assessment to be presented in evidence -on the basis that there was no formal police investigation underway.
A local medical doctor who had initially treated the child was allowed to give evidence to the Cork family court. She told the documentary crew that she was humiliated and degraded in her bid to provide supporting evidence.
The court insisted that the mother undergo examination including a lie detector test which was administered by an institution which has a long history of working with Tusla. Tusla was hostile to her allegations. Fearing bias in the examination she requested a witness and the recording of events. This was refused. The report found against her.
With help from the Polish community and her own earnings from house cleaning, Danuta has paid thousands of Euro on legal fees to no avail. She says she was exploited and rendered into poverty by lawyers -some of whom demanded cash payments without receipt.
The documentary feature ends with the crew departing Cork by air and making final reference to the "kangaroo courts" which oversee family law in Ireland. 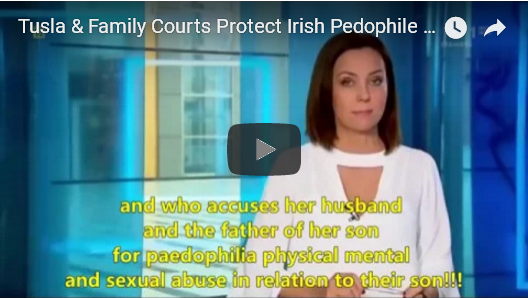