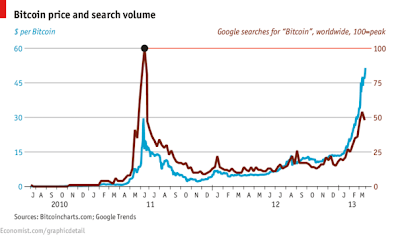 Bitcoin's trading price just broke through $100. But if you own the digital currency, don't crack open the champagne just yet.

And if you're thinking of buying the surging e-coins, think twice.

Search volume on Google about "bitcoin" closely tracks spikes and falls in the bitcoin price - as the mid-March, 2103 graphic snapshot above shows. Since then, interest has quickened to match the 2011 first wave of public awareness. But price has outperformed interest in 2013's more mature market. There lies the danger.

The market for bitcoins is not terribly liquid. Many e-coins languish in enthusiasts' electronic matresses. So when there's a sudden incoming stampede of new bitcoin adoptees - low liquidity powers the price steeply.

The EU's debacle in Cyprus made bitcoin a novelty item du jour for global media outlets. But absent a new austerity crisis, media interest will fade and "bitcoin" will inevitably become just another story in a busy day.  That happens with niche issues all the time.

If the vintage pool of bitcoin holders feel the interest wane and believe the top is in, the cash-out could hammer the price to single digit dollars - before a recovery to a justifiable price in the range of $25 to $50.

I just ran a Google Trends analysis for the word "bitcoin," and I asked Google to forecast its expectation of future search interest. The graph below shows a result which resonates with my journalistic instincts.

Timing is all, they say. And right now, is dangerous bitcoin timing. 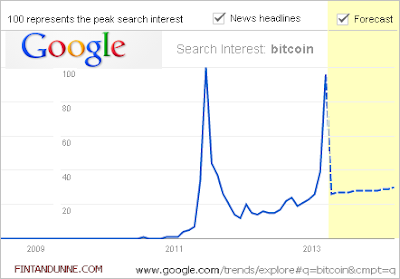