Showing posts from July, 2009
Show all

In the wake of the street protests across Iran on July 9th, Prof Scott Lucas joins Fintan Dunne to discuss the political fallout against the background of political developments which took place during the last week in Iran. Interview Guest: Professor Scott Lucas Scott Lucas is Professor of American Studies at the University of Birmingham, UK. He is also Adjunct Professor of the Institute for North American and European Studies at the University of Tehran, and a member of the Advisory Board of the Centre for American Studies and Research at American University Beirut. A specialist in US and British foreign policy, he has published extensively on Middle-East politics -especially on the Suez Crisis. Professor Lucas is a frequent contributor to American, British, and international media. He writes for, and is a founder of, the weblog EnduringAmerica.com --where he currently blogs unmissable news analysis and reporting. LISTEN: Mp3 Audio Protester estimate subsequent to the above
1 comment
Read more

Iran: A Regime Built on Sand

By FintanDunne - July 04, 2009
Respected investigative journalist and ' Devil's Game ' author, Robert Dreyfuss was in Iran for the elections. His go-to, singular account in 'The Nation' of the country's election crisis, paints an unflattering picture of a government abandoning all but a propaganda pretence of democracy: It was clear by nightfall on election day, June 12, that something was wrong. Across Tehran, troop transports rumbled out of the IRGC's fortified bases. Before the polls had even closed, Tehran took on the air of an occupied city. Later that night, ominously, my cellphone went dead, like everyone else's. The atmospheric article outlines the breath across Iranian society of alienation from the coup regime: Besides reformists, students, women and businessmen, Khamenei and Ahmadinejad are losing their core constituency: the clergy. And given that Iran is a state run by the priestly class, that might prove their undoing. I spoke to a dozen or so clerics, from low- to mid-
1 comment
Read more

By FintanDunne - July 03, 2009
There is only one revolution tolerable to all men, all societies, all political systems: revolution by design and invention.... --- R. Buckminster Fuller T he recent dramatic events in Iran have indefinitely sidelined the hard-line mullahs. I'm referring to the mullahs of the rabid US neocon cohort and their corresponding absolutists in Iran. Mere weeks have consigned John McCain's infamous "Bomb, Bomb Iran" to history's lamentable anachronisms. The "collateral damage" of conquest now has a face: Neda's. Millions more Iranian faces join her in our mind. And we like them! We like, not just: the westernized youths of Tehran. We also like the fearless black-clothed women who took the beatings; who answered back; who gathered the stones to be used against the firearmed Basij. We even like some of the "towel-head" (see: prejudice, 9/11, Iraq) mullahs. Such as Mehdi Karroubi -striding with arms aloft in defiance; marching to Qoba mosque ami
1 comment
Read more 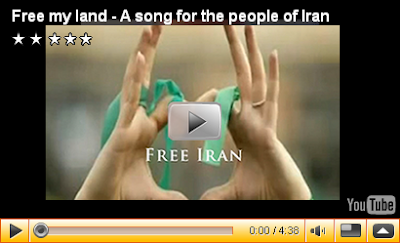 Earlier today I found this beautiful new tribute song to the Iranian uprising on YouTube. Listen and watch, and if you think it captures the spirit of Iran's uprising, then do whatever you can to make this viral on the internet. Thank you. And thanks to YouTube user " freemylandsong " for a moving and wonderful song. The Spirit of the People of Iran has inspired you. YouTube URL: http://www.youtube.com/watch?v=4_r0GgHiIzE 2nd @ 19:00GMT: Tweet on http://twitter.com/fintandunne
2 comments
Read more

Blood or Politics: What Next for Iran? Despite the official certification of Mahmoud Ahmadinejad as the victor in Irans presidential election, and despite the relative calm on the streets of Tehran, the country is still seething. Rumours abound of moves by different factions, and the opposition is trying to consolidate a clerical and political platform to take a stand against the government. The main opposition leader, Mir-Hossein Mousavi has now called on his Facebook page for a general strike. Protesters who took to the streets to shed blood for democratic principles are still afire with a zeal for reform. So what next for Iran? Will political pragmatism win out over factionalism? Or will arrests, detentions and street clashes dominate the weeks ahead. Professor Scott Lucas of Birmingham University discusses the likely directions for Iran with Fintan Dunne. Interview Guest: Professor Scott Lucas Scott Lucas is Professor of American Studies at the University of Birmingham,
1 comment
Read more

By FintanDunne - July 01, 2009
Ahmadinejad Victory Was Announced to Halt Compromise The claimed victory of Mahmoud Ahmadinejad in the presidential election is built on sand and hides a deep split in the Iranian establishment. That's the hidden tale behind a most curious mystery surrounding the official announcement by Irans electoral Guardian Council of a presidential election victory by Ahmadinejad. Just hours earlier the very same electoral body had extended by five days the period for investigation of voting anomalies, and had welcomed proposals by Mir-Hossein Mousavi as "positive." That decision not only indicated a compromise deal on the election outcome, but it should have postponed any official confirmation of a victor. So why the sudden turnaround? Does it hint at a spit in the government? Now You See It, Now You Don't! Early on Monday, 29th of January the New York Times reported the extension by Iranian authorities of the deadline for examining voting irregularities. The web URL
Post a Comment
Read more
More posts