Showing posts from March, 2013
Show all

BY FINTAN DUNNE - MONDAY, MARCH 18, 2013   Ahead of a crucial meeting of the BRICS nations in Durban next week-- a Russian government report proposes speeding up the integration of the BRICS economies and bypassing existing international financial systems, in order to preempt Western powers' attempts to hamper BRICS development.   The report will inform Russia’s national strategy and could lead the BRICS  to greatly expand their existing proposals for a BRICS development bank.  One recommendation of the report is a:  "...partnership agreement between the [BRIC] nations’ stock exchanges and creation of a “virtual pool of reserves”   That's effectively a proposal to set up a parallel BRICS organization to the  World Bank, IMF and other western-dominated financial regulatory structures.  The Russian expert report also proposes to  "...create a bank for international settlements to assure safety to the economies of BRICS member countries...."   A plan to create a
Post a Comment
Read more

There are political tremors rumbling as a fierce debate rages among activists of Italy's 5-Star movement, founded by Beppe Grillo. On Saturday, several 5-Star Movement(M5S) senators voted in a parliamentary secret ballot to elect former anti-mafia judge Pietro Grasso as speaker of the Senate - thus defying instructions devised by Grillo and earlier endorsed by a majority, to cast an empty ballot. The M5S rebels were voting tactically and pragmatically to block the candidate put forward by Silvio Berlusconi's Freedom People party. But that evening, in a posting on his blog, Grillo condemned their action and said rebel senators would be expected to resign for having "lied to voters". That spurred over 12,000 comments on Grillo's blog post - and rising. Some accused Grillo of acting like a dictator, while other attacked the rebels for their betrayal.  On Sunday, Giuseppe Vacciano, one of the rebel senators, defended his decision to vote and said he was ready to
Post a Comment
Read more

The organizers of the popular TED Talks have censored presentations by respected British biochemist, Rupert Sheldrake and his compatriot, Graham Hancock , author on ancient civilizations and human consciousness. On the TED blog, Chris Anderson, Curator TED Conferences, posted that TED Talks by the pair at the TEDxWhitechapel event, contained " misleading statements ," and amounted to " pseudoscience " - in the opinion of TED's Science Board.  Accordingly, their TED presentations " should be removed from distribution on the TEDx YouTube channel ." In a response on his Facebook page , Graham Hancock challenged the TED orthodoxy to: " identify where exactly in my talk these alleged “misleading statements” occur ." He has a point. The Holy TED Talks Inquisition seems to have attributed to both men a range of positions that neither actually maintain - and then have gone on to use their own error to scratch the pair. Truth is t
Post a Comment
Read more 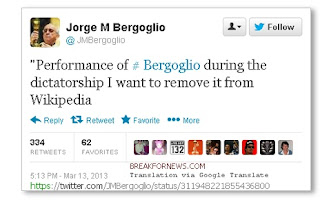 https://twitter.com/JMBergoglio/status/311948221855436800 Ok - time to come clean.   The Twitter account of the Pope --wanting his Wikipedia entry edited-- was a caper. A media spin to focus public attention on Cardinal Bergoglio's misdeeds in Argentina.  But his collusion with the military was assuredly real and indeed, fatal for the many innocents who were murdered. More: http://thebea.st/15Nr8V0 EXCLUSIVE REPORT - Well, it didn't take long for the newly-elected Pope Francis I, to embrace information technology in his papacy. But in a rather disappointing way. Within hours of his elevation, he was demanding -via his Twitter account- that details on Wikipedia about his role during Argentina's military dictatorship be removed. The Pope, formerly Cardinal Jorge Mario Bergogli, defended his actions saying he had helped hide some of those being pursued by the regime, and had clean hands: "I want to clarify that always acted under the orders of God, everything
Post a Comment
Read more

How to Green Our Deserts and Stabilize Climate

This video is unmissable viewing. Allan Savory's TED talk was potential game-changer event in our losing battle against global desertification: the  most important challenge determining our ability to sustain mass human populations since...... the  last ice age. So this is not really an issue we can afford to  continue to get wrong   or allow to remain mired in the name-calling arguments which  constitute the poorly-titled, so-called "climate  debate ." Allan Savory does  not  just have a " theory ."  He and others have  30 to 40 years  of  successful , practical interventions which restored desert landscapes to their former natural splendor.  And  he has a theory to explain why his ideas work. Because: they  work!   More Here >
Post a Comment
Read more

by Fintan Dunne - 3/5/13 8:30EST Hugo Chavez was suffering from a type of pelvic cancer - likely a "sarcoma" of joints or cartilage. Following his first treatment in mid-2011 and a relapse 18 months later, Dr Kent Sepkowitz speculated --just two months ago-- that: "[Chavez] likely has a year or two or three left —years of more surgeries, more chemo, more radiation if he can tolerate it, and progressive and painful debility." [ http://thebea.st/XoRbja ] That was a well-founded medical judgement - based on the mortality data of a typical 5-year disease prognosis. Which makes the death of Chavez - so soon after his first relapse all the more surprising. Death from sarcoma is typically the end result of a long, drawn out series of medical battles. Rarely the outcome of a brief skirmish. Chavez had competent treatment of a well understood form of cancer. In that context, to die in under two years while under such intensive care is exceptional. Venezuelan VP, N
Post a Comment
Read more
More posts