Showing posts from June, 2014
Show all

How Ireland Snatched My Beautiful Baby 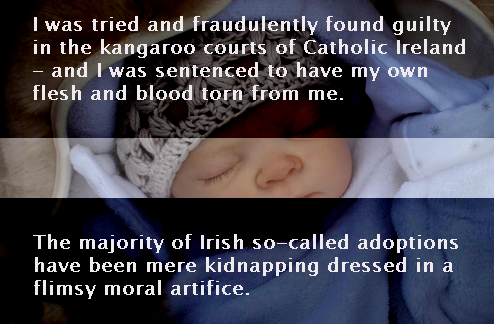 by Kathy McMahon  with Fintan Dunne Ireland, my native country, mobilized the State to illegally snatch my baby from me -and nothing can ever undo the damage inflicted on me and on tens of thousands of innocent Irish mothers. I was tried and fraudulently found guilty in the kangaroo courts of Catholic Ireland - and I was sentenced to have my own flesh and blood torn from me. Instead of helping me defend my parental rights, the Irish government and the Irish Catholic Church conspired to construct a sham legal process based on coerced consent in order to steal my child. But don't take my word for it. Take Michael Viney's word - word for word. My child was taken in 1974. Just ten years earlier, a  1964 article by Michael Viney of the Irish Times, details alleged " progress " made on adoption issues as justice minister, Mr C. J. Haughey steered that year's  version of the 1952 Adoption Act into law. (Aside: afterwards, the Irish Catholic Archbishop of
1 comment
Read more 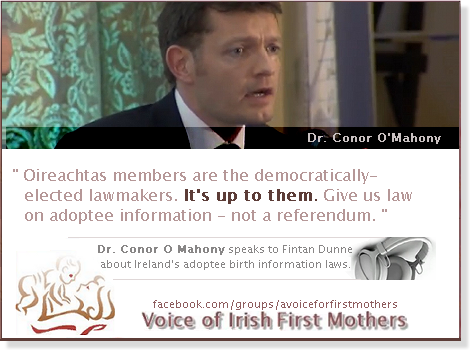 News that between 1925 and 1961 around 800 deceased 'illegitimate' babies had been interred in a septic tank by Irish Catholic nuns, has by now swept around the world. But, back in Ireland, the quibbling has already begun. The Irish Times yesterday headlined " trouble with the septic tank story ", questioning the size of the tank where Tuam local, Barry Sweeney discovered skeletal infant remains, quoting Sweeny's estimate that the tank's concrete cover stone was "little bigger than his coffee table". Only about 20 babies were in the septic tank, it now seems. The balance of the 796 infants lie unmarked under the plain meadow around the tank. That's a mere 20 in the tank and 776 in the meadow. Had the figure been, say: over 100 in the tank, we might have had a real problem there. Within 45 minutes of that Irish Times report, one  Catholic apologist was greeting the clarification with glee, cheering that: " there is no way that you
1 comment
Read more
More posts